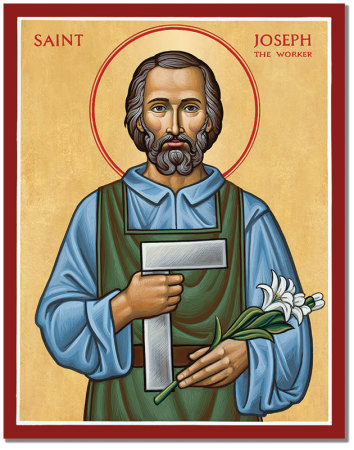 St. Joseph has long been the patron saint of workers, particularly those who work with their hands.  (He is also the patron saint of fathers, immigrants, and more cities, provinces, and countries than could possibly be named here.) The above icon shows St. Joseph holding his square, a traditional sign of the carpenter profession.

St. Joseph’s primary feast day is March 19, but in 1955 Pope Pius XII named May 1st as an optional, or secondary, feast day devoted particularly to St. Joseph as a worker.  Many believe that this was a response to the then-growing popularity of May 1st as the recognized holiday of the International Socialist Movement, and as a clear sign that socialism was not the only tradition that recognized the dignity and the importance of the worker.  (Similarly, many of the 1930s laws that form the basis of United States labor law were enacted in response to the socialist movement which was then current among American workers, and primarily immigrants).  Today there are numerous churches named for St. Joseph the Worker, as well as several charities devoted, in his honor, to assisting people find employment.

There is no formal patron saint of employment attorneys, but St. Joseph the Worker is a model and exemplar of constancy and the quiet dignity that comes from doing one’s job.  I am proud to celebrate him today.